Angelo Lavranos designed the L26 in 1978, which went on to become the leading competitive keelboat class in South Africa. Below is Angelo’s own account of how it came about, so I’ll leave that to him. Angelo was a South African (as far as I know – he certainly lived here for many years), before moving on to New Zealand where he now lives. L26s were all built in SA, originally by PSI Yachts in Durban, later by Ton Cup as well. Maybe others too. Despite its age now (30 years) – the “Ls” as they have become known are surprisingly fast – even beating some of our larger racers across the line on occasion! They are particularly fast upwind if they have enough crew and benefit from the relatively high crew-weight/displacement ratio, sitting out on the wide beam. They have a high form stability factor, being beamy and light, but generally low-tech boats, keeping costs down. Despite this, Ls manage very well in heavy weather. Mostly, they have no reefing points in the main – at least in the racing suite! They remain a well-managed class, and the class choice for the Lipton Cup. They are now relatively affordable and have made performance sailing accessible to many of the youth and development programmes in SA. Lavranos also designed many other successful boats (too many to mention!) – see his website at www.lavranosyachtdesign.co.nz 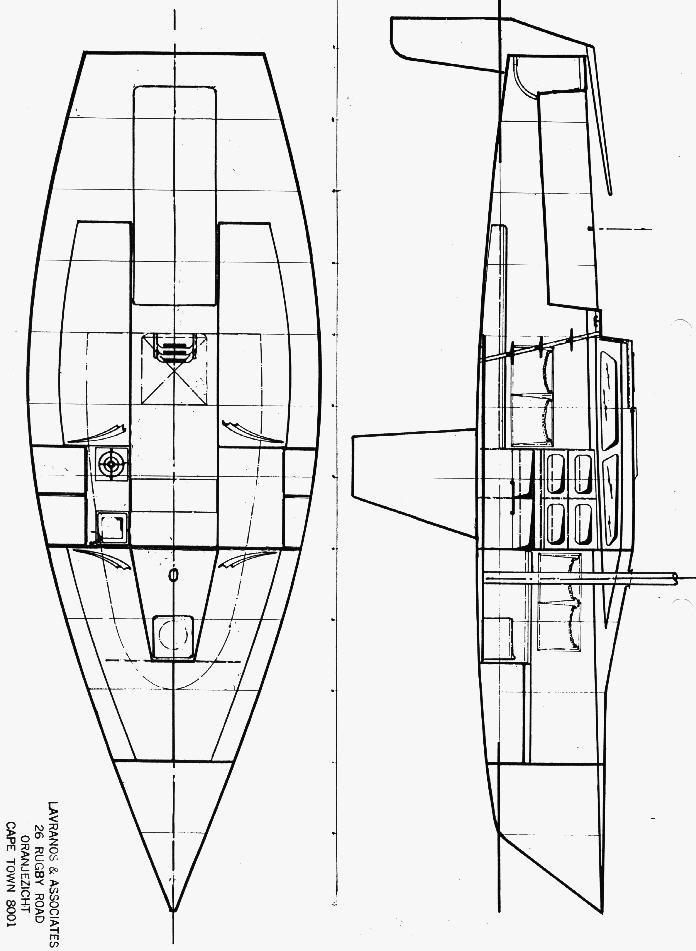 Notes on the L26 by its designer, Angelo Lavranos

Back in 1978 I was asked by David Cox to design what became the L26. Dave was one of Durban’s most prominent and influential “movers & shakers” in yachting. He later also initiated and masterminded the L34 Class also. Dave felt that “one Design” was the way to go, and that a large body of yachtsmen were fed up with “chequebook“ yachting and rapid obsolescence endemic with the IOR rule of that time. That sounds a familiar complaint even now. How right they were ! Dave and John Gordon Thompson formed L Boats as the licensee. The first boat afloat “Electron” (small but very very fast!) owned by Johnny went afloat in April 1980. Actually No 001 was for John Sully (a very prominent Transvaal Yachtsman) who was the first “real” buyer. Within 12 months there were 12 afloat, all from PSI Yachts in Durban, and 32 on order. By 1981 Ton Cup Yachts in Cape Town were also licensed to build. By April ’82, 60 were built with another 10 on order. Dave wrote an excellent set of Class Rules right at the outset, and marketed the boat very effectively and relentlessly. Ultimately (within very few years) 84 were built.
When the L26 was conceived the Lipton Cup was “dormant” since the demise of the 30 sqm class. In 1982 it was revived using IOR Quarter Ton Cup Class boats. Within a couple of years that too fizzled. The L26 was chosen only in 1984, when the class was already established and very well distributed amongst all the clubs round the country. Because of this the Lipton Cup was an instant success in the L26 and the event in turn helped maintain interest in the L26.
The design brief given to me was the key to the success of the boat:

She fulfilled the brief OK. Many have done coastal passages, and even the Da Gama race from Durban to East London (and back) several times. In the terminal “horror” Da Gama race of ’84 Dick Haliberton in Element was OK but Cape of Good Hope the Navy entry did a 360 roll, and somebody opened the hatch in the process. They flooded and got rescued. Notably Steve Meek even sailed one from Cape Town to East London, doing a 194 mile day in the process.
I designed some “spin off” boats for Dave Cox after the L26’s stopped. We did one with the L26 hull and a cruising deck (more headroom, volume), a shallower keel, cantilever mast called the C26. With the economic recession only two were built. After that another 2 or 3 were built with conventional stayed rig and called the S26. Also the original C-Flex plug with a wood deck using the L26 design (sail no 000) called Origin also did a lot of racing (outside the L26 class.)
The sailors and people involved in the L26 have been a veritable “who’s who” of top Yachties, ALL the sail makers (most notably Rick Nankin in partnership with Chris King), and a lot of very successful people in other spheres. Lex Raas, who built all the Cape boats is now CEO of Moorings worldwide. His partner in Ton Cup was none other than John Robertson. His (late) partner Jerry Caine built a lot of the Durban boats after Basil Cook at PSI Yachts.